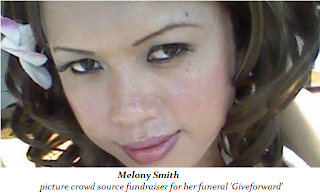 The mainstream media reported Ms Smith's murder using her birth name, further obscuring her identity by misgendering her. Thanks to Lexi Cannes her death will not go unnoticed.
TransPride LA has verified a way to help with the final expenses of this young immigrant, but only a couple days remain before she is laid to rest.

The following article is one of only a few mentioning her death and a prime example of why we almost didn't know about her authentic gender.
**Trigger warning:

Source The San Gabriel Valley Tribune: BALDWIN PARK - A suspect has been identified in the beating death of a 26-year-old Baldwin Park man found dead inside a motel room earlier this week, officials said.

Stephen Gonzales, 28, of West Covina, was behind bars Thursday after being arrested by deputies from the sheriff’s Industry Station Wednesday on suspicion of drug possession, Lt. David Coleman of the Los Angeles County Sheriff’s Homicide Bureau said. He was expected to be charged with the murder of Vanhxay Inthichack (Melony Smith) this week or early next week.

Inthichack’s body was discovered about 1:30 p.m. Monday inside a motel room he had rented in the 13900 block of Francisquito Avenue, investigators said.

Though it was not immediately clear how he died, an autopsy determined he had been beaten to death and the case was ultimately ruled a homicide, coroner’s officials said.

A motive in the alleged slaying was not clear, nor was the relationship between Inthichack and Gonzales.

Detectives identified Gonzales as a suspect through cell phone information and surveillance footage near the crime scene.

Anyone with information was asked to contact the Sheriff’s Homicide Bureau at 323-890-5500.

Options
Trans Pride L.A. · 1,323 like this
12 hours ago ·
Donations need to be made by the 18th. Donate at GiveForward. We need to take care of our own, but sadly I could not afford the lowest level of donations the fundraiser offered. I emailed the fundraisers author and asked her to lower the donation levels.

I have reached out to Brian Day the author of  The San Gabriel Valley Tribune's post which made no mention of her status via twitter, facebook and comments. I hope Mr Day will edit his article to at least make a mention of her transgender status

@kellibusey I understand your feelings, but can't publish a story based on social media posts. Those who knew the victim, please contact me.
— Brian Day (@sgvcrime) September 15, 2013

You have provided data regarding Bankruptcy. Bankruptcy attorney lawyer and bankruptcy professional web site able to study your case by applying highest data & expertise. we have a tendency to square measure the biggest professional, professional & shopper service supplier.