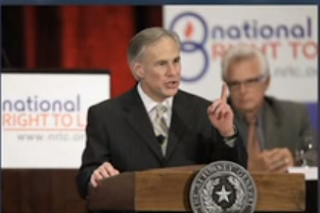 Abbott won't come out and say he hates thy gays but he will make it legal for others to, if he can.

Texas Attorney General Greg Abbott and two leading Republican candidates to succeed him say they want to sue the city of San Antonio over its vote last week to add sexual orientation and identity to an anti-discrimination ordinance that already included race, religion and nationality. But Rick Casey says language changes in the new rules actually respect the First Amendment more than the old ordinance.


My San Antionio reports Abbott doesn't bash gays in his warning. He's just worried about language in the ordinance that he thinks will punish those who do bash gays. But such language was in the previous anti-discrimination ordinance for years.

“No person shall be appointed to a (city) position if the City Council finds that such person has, prior to such proposed appointment, engaged in discrimination or demonstrated a bias, by word or deed, against any person, group or organization on the basis of race, color, religion, national origin, sex, age or handicap,” the language said.

This is very disturbing language. Under it, any Christian who said she thought Jews were going to hell might be barred from office. But it didn't seem to disturb anyone until Councilman Diego Bernal sought to add gays and transgendered persons to the list. Bernal, himself a civil rights lawyer, took out that language early in the drafting process. It is no longer in the ordinance.

A surviving section, however, does include similar language. It says, “No appointed official or member of a board or commission shall engage in discrimination or demonstrate a bias, by word or deed, against any person, group of persons, or organization (based on race, color, sexual orientation, etc.) while acting in their official capacity while in such public position.”

A board member or other official who violates this section can be removed by City Council.

This is the section Attorney General Abbott has focused on. “I believe that violates the First Amendment — both freedom of speech and freedom of religion,” he said.