2012 planetransgender Top 7? Not a Super Star Studded Review. Just Us. 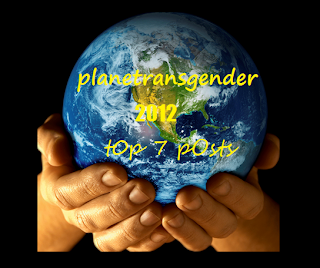 Why 7? Because the number 10 is everyone else's TOP POST number. Why 10 anyways, it's too many? And I will tell you how many page views each post got, lets see one of the top 10-ers do that.

1. 6693 pageviews:
Tegan Smith Handcuffed Dragged Off Plane at Dallas Love Field "for being trans" Went viral thanks to you. And thanks to you airlines may reconsider pulling one off us off their planes on account of our trans-ness.

2. 5157 pageviews:
The Alice and Dana L Word Hot Lesbian Sex Scene YouTube Allowed . I thought that post would never be knocked off the poll spot. It was a little bit misleading as it was a love scene and not so much sexual. But I'm a blogger, so hey it's hot love.

3. 3030 pageviews:
RadFem Cathy Brennan, Lawyer, Maliciously OUTS 17 Y.O. Transgender Youth To His High School . Brennan will stop at nothing to prove she was offended by a trans person using the word 'rape' even if it was a unfortunate utterance in jest by a child.

4. 1873 pageviews:
This Pussy Writer Riots Against Putin's Russian Orthodox Inquisition. Before Pussy Riot gained superstar status with sting there were only us, the grass roots humanists blogging about there plight. Now I can't even get on Amnesty International Interactive wall. True anonymity is achieved.

5. 1841 pageviews:
Meteor Drag Queen Performer Paul Ryder: The Transphobia YOU spread HAS tried to Kill Me. A highly controversial post I will do again and again as many times as anyone, even someone from under the umbrella profits and worst yet gloats from enhancing transphobia.

6. 1589 pageviews:
Cathy Brennan's "Sorry about Your Dick". Yes Brennan made the top 7 twice. One thing for sure, Brennan knows how to step on it. Yes Brennan you stepped on your dick twice in 12. Hard. Crushing stomps even.

7. zero views:
Sooo, I only posted 6 so sue me, but you got to get in line. Anyways thats it. Thank you from the bottom of my heart for your readership. We have made a difference adding 100,000 pageviews this year, many coming from those of us who wish to stay informed but some came from our enemies, and they are impressed so keep coming back. And don't forget, not that I ever said this publicly before, opposing views are welcome. I am not the only one on this planetransgender.