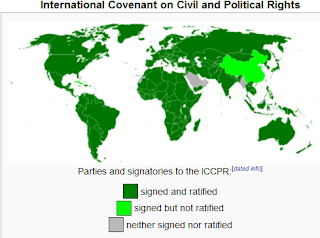 The European Parliament adopted it's 2010 2011 review of human rights in member states. In doing so it made it clear to the Russian and Ukrainian governments, among other violators, you want to be known as civilized society? Then act like you do and stop persecuting LGBT people. Member states who cooperated with CIA rendition were also taken to task.

39. Calls on the Member States to properly fulfil their obligations under international law, which they have so far failed to do, to investigate serious human rights violations carried out in the context of cooperation with the CIA counter-terrorism programme, to step up the fight against trafficking in human beings and organised crime and to afford full redress to victims;

93. Calls on Member States to ensure the protection of participants in LGBT public events, including pride marches, and to ensure that these events can take place lawfully.

94. Deplores that transgender people are still considered mentally ill in a number of Member States; calls on Member States to introduce or review legal gender recognition procedures, on the model of Argentina, and review conditions (including forced sterilisation) set for legal gender recognition; calls on the Commission and the World Health Organisation to withdraw gender identity disorders from the list of mental and behavioural disorders and to ensure a non-pathologising reclassification in the negotiations on the 11th version of the International Classification of Diseases (ICD-11).

Source: Gay Star News"Michael Cashman MEP, co-president of the LGBT Intergroup, reacted: ‘Both Russia and Ukraine signed up to the European Convention on Human Rights and the International Covenent on Civil and Political Rights. No-one forced them to, and they must now respect their international obligations.

‘The European Union will remain strong in its demands, and will continue supporting the activists who bravely defy these unfair laws.’ 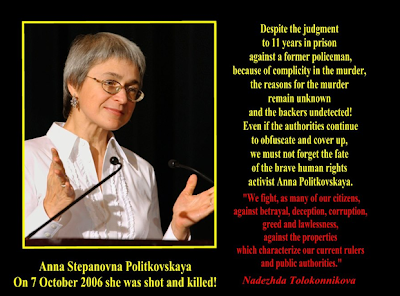 Ilya Politkovsky says deal for officer accused in killing of Russian journalist won't help find person who ordered the murder
Politkovskaya, a sharp critic of the Kremlin...and its policies in Chechnya, was shot dead in the lift of her Moscow block of flats on 7 October 2006. Investigators have failed to determine who ordered the hit.