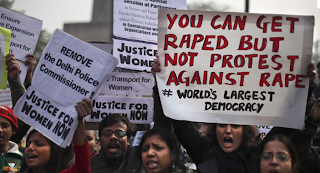 As the world mourns the death of the young woman brutally assaulted, raped and thrown from a moving bus transgender people worldwide wonder. How will this affect trans people in India? Will the government need a riot to punish the perpetrators? And what about the social climate that not only allows this to happen but punishes the victims as well?

My hope is that this will help awaken India to the root causes that allow a society to ignore rape. India's misogynistic, patriarchal and transphobic society must change. Respect for woman isn't optional, it's necessary if India is serious about stopping this from reoccurring.

The Indian gang rape victim whose assault in New Delhi triggered nationwide protests died of her injuries on Saturday in a Singapore hospital, potentially threatening fresh protests in India where her case is a rallying point for women's rights. The 23-year-old medical student, severely beaten, raped and thrown out of a moving bus in New Delhi two weeks ago, had been flown to Singapore in a critical condition by the Indian government on Thursday for specialist treatment. Al Jazeera's Divya Gopalan reports on the latest from New Delhi.