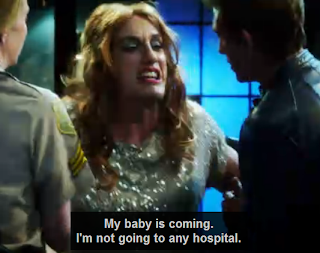 While the officers are searching for 'wacko's' at the mall they encounter a person in womans clothing who identifies as a female, but with one bizarre twist, she's trans and claims to be pregnant.

The trans person's scene's are always at key moments. It's obvious CBS is well aware that a trans person acting bizarrely will sell this episode. Eventually the trans person begins to threaten herself and her baby and does kills herself.

That scene was deleted from the online version but according to Nick Adams, GLAAD’s Associate Director of Communications "In the next scene, Joslyn has been released from the chair, but now she is even more hysterical, claiming that her water has broken and the baby is coming. She again violently attacks everyone in the room, grabs a pair of scissors and repeatedly stabs herself in the stomach. The show lingers on a shot of her bloody body lying on the floor of the station. Immediately after the commercial break one of the detectives says, "Hospital said our pregnant transvestite was D.O.A."

We need to have a petition from GLAAD to send to CBS. This cannot be allowed to continue without some push back !