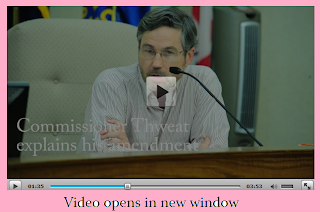 LGBT human rights activists and opponents of equality gathered in Helena Montana to voice support for and against the Non-Discrimination Ordinance.

Apparently orchestrating the opposition was Joseph La Rue, legal counsel for the Alliance Defending Freedom in Scottsdale, Ariz. a quasi religious organization, who spoke against the Ordinance.


Source: Independent Record: "The amendment to section 1-8-4 read: “However in any place of public accommodation where users ordinarily appear in the nude, users may be required to use the facilities designated for their anatomical sex regardless of their gender identity. Such requirements shall not constitute discrimination for purposes of this section 1-8-4.”
"The amendment, Thweatt explained saying he was ambivalent about its merits, would allow the owner of a business to remove a person who, for example, was born male but is now a transgender person who had exposed genitalia in a sauna."

"The explanation was in reference to reports of this happening at Evergreen State College, in Olympia, Wash. The college has disputed specifics of the incident. In a similar case, a parent of a swim club member complained of indecent exposure but local prosecutors there declined to charge the person."

****************************
I find it outrageous that Council Member Thweat would site ONE  instance of hearsay to validate to discriminating against transgender people.
Support our equality by signing the Helena Human Rights Petition

"Support our equality by signing the Helena Human Rights Petition