Some things seem too embarrassing to admit. Trans people living authentically will attest that the internal battles we wage with ourselves are multiplied in intensity by social stigmatization.

The pressure to keep our true selves secret comes from many places and if our employer adds to that sentiment it can seem to be too much to deal with.

In 2010 the "MI6 codebreaker Gareth Williams was found naked, locked into a Red North Face sports bag. Most speculated at the time it was a hit.

Most media focus is on his  "pictures of drag queens on his computer and had £20,000-worth of designer women's clothes in his flat along with women’s shoes and wigs".

"He browsed self-bondage websites and sites about claustrophilia - the love of enclosure - on his computers and phone and was looking at fetish websites days before his death." 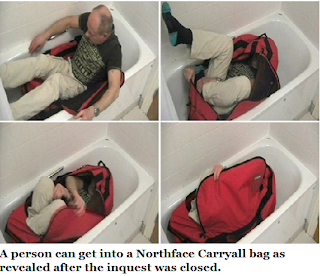 Friends and family were upset at speculation that Mr Williams may have been gay and speculated that "some agency specialising in the dark arts" was behind his killing.

I wish the mainstream media would stop sensationalizing and ask the question, did Gareth Williams commit suicide to escape the pressures his employer would have undoubtedly brought to bear?

Was this a murder to keep Gareth Williams silent or a suicide?