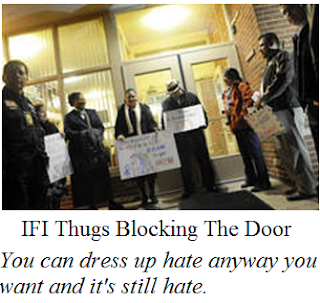 Will the mob organized by the Illinois Family Institute strong arm the East Aurora Ad Hoc committee from doing what the school board originally accomplished when they unanimously approved transgender inclusive policies?

Its possible according to the Beacon News as the Ad Hoc committee chairwoman has indefinitely postponed the next meeting for fear that some of the committee members are at risk of being harmed.

Why would Chairwoman Anita Lewis feel there was danger and who's behaviour at that meeting would have led her to think that?

Transgender committee member Joanie Rae Wimmer wrote in her letter posted below that she felt intimidated by one the IFI recruits who was for some unknown reason allowed to stand closely behind her for the entire meeting, gesturing and pointing at her while making obnoxious comments disparaging her gender. 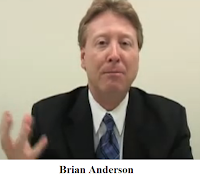 That person has been identified as Brian Anderson a founder a local recruiting company which quite incredibly claims it does so in the best interest of there clients by hiring the best heterosexual cisgender person for the position.

The other transgender committee member Crystal Ann Gray posted this on her facebook page about the struggle just to get past the IFI protesters:

"Shari and I are here for the meeting in Aurora and we were met at the door by IFI supporters with protest signs. We almost did not get through the door. We are safe for now and Aurora PD is on the way to make sure everyone is safe and that it is uneventful."

One of the nice things about being in business for myself is that I enjoy the freedom to speak my mind without fear of having my employment terminated or other negative repercussions. I was invited to serve on the Ad Hoc Committee and have every intention of continuing to do so. ...But I cannot go through an experience like last Thursday night's meeting without saying what I need to say about it. I didn't speak up at the meeting only because I understand and respect Robert's Rules of Order and the process by which governmental and quasi-governmental bodies operate.

Never have I seen so many people gathered in one place so determined to display their own ignorance, bigotry, and mean-spiritedness. I should not have been surprised because the protest was organized by the Illinois Family Institute, which has been certified as a hate group by the Southern Poverty Law Center. The Beacon News had a photograph of David Norck of the Illinois Family Institute assisting the protestors. It would be like having the Ku Klux Klan come to a meeting of a committee whose work was to craft a policy for racial integration. We had speakers tell us that transgender people have "twisted minds" and are "gender confused". My favorite part of the evening was when a speaker, who for some reason was allowed to stand behind my chair for the entire meeting in an intimidating posture, pointed his pen at me, and told the assembled throng that I was there to "push my lifestyle" on the children of East Aurora. This same person had never met me before that evening; doesn't know anything about my "lifestyle"; doesn't know if I spend my free time with my children, in the library, out clubbing, or at church; and knows nothing about me other than the fact that I am transgender. Because he knows nothing about me other than the fact that I am transgender and feels justified in attacking my "lifestlye", he is nothing but a hate-filled ignorant bigot. It is no different from making assumptions about a person's "lifestyle" because they are black or Hispanic.

I was disappointed not to have had an opportunity to speak out at the meeting, and to have to listen to ninety minutes of transphobic diatribes.

We cannot let a certified hate group prevent the Ad Hoc Committee from having its dialogue, proposing policy, and taking a vote. We don't have mob rule; we have a democracy. And while the First Amendment certainly protects every one, including bigots (the U.S. Supreme Court allowed the American Nazi Party to march in Skokie), reasonable time, place, and manner restrictions may be imposed on the right of public comment so that government bodies and quasi-government bodies can do the work that they are charged to do. It is my suggestion that we, as a Committee, or the School Board, itself, adopt reasonable time, place, and manner restrictions on public comment so that the Committee can do its work.

This letter will be an open letter which I post on my blog.

Laurie Higgins of The Illinois Family Institute responded to Wimmers letter hatefully, not missing a opportunity by posting this vile screed attacking the transgender committee members on the IFI website.

In all reality we don't have to look any further to know who the Ad Hoc committee is afraid of. This hateful rhetoric by the IFI endangers not just the committee members but all gender gifted people.

It's time the Christians who participated on behalf of the IFI to consider this. Transgender people were spoken of THREE times in the bible. Once by God, once by Jesus and once when a angel helped a conservative preacher understand, we are all loved. Your actions are in direct disobedience to the teaching of our lord.