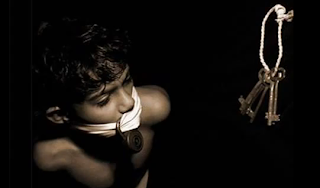 They hunt us down for fun. Imagine yourself on the way to the market and blue lights suddenly pulsate behind you. Pulling over you your heart stops as the police quickly open your door and throw you against your car.

I haven't done anything wrong you shout as a fist smashes into you. You are being assaulted, imprisoned for the crime of being transgender in Kuwait. But the worst is yet to come. Rape. Torture. Being sold into slavery.

16 people are being held in Kuwait jails some for nothing more than having soft skin or a feminine voice. Most of the detainees have been arrested for ‘Imitating the Opposite Sex’, a ambiguous law which gives Orwellian power of arrest to law enforcement explaining why some of the detainees claims that that they were  arrested while dressed as a man and latter forced to put on women's clothing.

This is the country that we "liberated" with American lives?