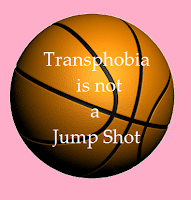 The radio station belatedly took action following the outrage expressed by you and I.


The following message was posted on the ESPN 980 Facebook wall: 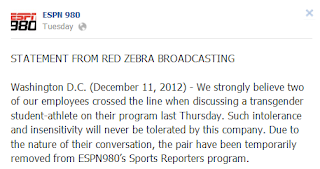 Many including myself felt the appropriate response would have been to fire these two after there second rant thinly discussed as an apology.

However the independently owned and operated sports radio station felt a suspension was fitting.  Awful Announcing brought up the point firing could and probably would have, in all fairness, inhibited future discussions about transgender people (transgender people's rights?).

This begs the question, what if that bigoted rant were focused at a black person? People of color are defined as a minority just as Gabrielle Ludwig is, would the station have felt a suspension an appropriate remedy then?

So what do you think?