Justice For January! Kill a Trans Woman & Get Bail? Friends Say NO! 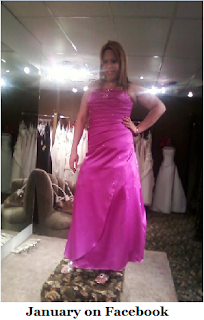 UPDATE: I have searched the web and have not been able to verify this but one of the rally attendees said bail was denied.

Transgender woman January Marie Lapuz from Santiago, Isabela Philippines immigrated to Vancouver, British Columbia to escape what has become known as a very transphobic country only to be murdered Sept. 29 at the age of 26.

Bail in Canada can be denied if "detention is necessary for the protection or safety of the public. This includes whether there is a substantial likelihood the accused will commit a further offence or interfere with the administration of justice.

This precisely what frightens the BC trans community. The crime was violent and resulted in the death of January. This was a real woman, live flesh and blood with hopes, dreams and passions as January's Facebook page reveals. Does her murder not equate to that of a cisgender woman? 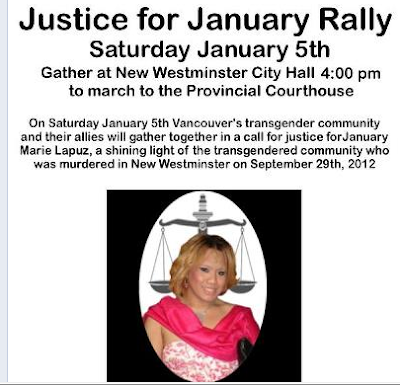 Persons charged with a criminal offence in Canada have a constitutional right to reasonable bail unless there is some compelling reason to deny it. These reasons can be related to the accused's likelihood to skip bail, or to public danger resulting from the accused being at large. In stark contrast to many other jurisdictions granting a constitutional right to bail, in Canada the accused may even be denied bail because the public confidence in the administration of justice may be disturbed by letting the individual, still legally innocent, go free pending the completion of the trial or passing of sentence (Criminal Code, s. 515 (10)(c)). :Wiki Bail Canada

Justice For January! Kill a Trans Woman & Get Bail? Friends Say NO!