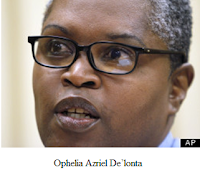 The million dollar question:
Will taxpayers have to foot another failed million dollar legal battle to deny Ophelia Azriel her right to medical care like they did with Michelle Kosilek ?

As many of you are aware I am an outspoken advocate for our removal from the DSM-5. But in these cases it's essential we remain in the DSM to insure that the most vulnerable of our community receive adequate medical care. And thats what we are all about. Community.

Virginia inmate Ophelia Azriel De’lonta (born Michael A.Stokes) filed suit under 42 U.S.C. § 1983 claiming that prison officials denied her adequate medical treatment in violation of the Eighth Amendment. The district court dismissed the complaint for failure to state a claim. Because we conclude that De’lonta’s complaint states a claim for relief that is plausible
on its face, we reverse and remand for further proceedings.

I.
On appeal from a dismissal for failure to state a claim upon which relief can be granted, we accept as true all the factual DE’LONTA v. JOHNSON 3 allegations contained in the complaint and construe them in the light most favorable to the plaintiff. Flood v. New Hanover County, 125 F.3d 249, 251 (4th Cir. 1997).

A.
De’lonta has been in the custody of the Virginia Department of Corrections ("VDOC") since 1983, serving a 73-year sentence for bank robbery. She is a pre-operative transsexual suffering from a diagnosed and severe form of a rare, medically recognized illness known as gender identity disorder ("GID"). GID is characterized by a feeling of being trapped in a body of the wrong gender. This belief has caused De’lonta to suffer "constant mental anguish" and, on several occasions, has caused her to attempt to castrate herself in efforts to "perform[ ] [her] own makeshift sex reassignment surgery." App. 14, 46, 48. De’lonta has described these ongoing urges to perform self-surgery as "overwhelming." App. 31.

In 1999, De’lonta filed a § 1983 lawsuit alleging that VDOC had instituted a policy that wrongfully prevented her from receiving GID treatment in violation of the Eighth Amendment. As in the instant case, the district court dismissed De’lonta’s 1999 complaint for failure to state a claim. We reversed and remanded, holding that De’lonta’s need for protection against continued self-mutilation constituted an objectively serious medical need under the Eighth Amendment and that De’lonta had sufficiently alleged VDOC’s
deliberate indifference to that need. De’lonta v. Angelone ("De’lonta I"), 330 F.3d 630, 634 (4th Cir. 2003). The parties subsequently reached a settlement in which VDOC acknowledged De’lonta’s serious medical need and agreed to provide continuing treatment.


There's a lot of controversy within the trans community about our tax dollars being used to fund a convicts SRS when so many of us will never have the same opportunity? Begging the age old question, what do I have to do to get SRS?