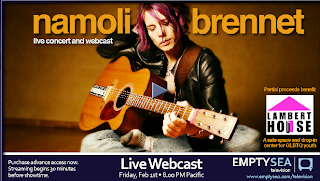 Facebook event "A rare and cool opportunity that I'm pretty excited about: My Seattle CD Release at Empty Sea Studios this Friday will be streaming LIVE in HD Video! Starting at 7:30 pm PST (concert starts at 8 pm). This is a great chance to catch a *super* high quality concert broadcast, and the cost is pretty darned cheap: just $6.99, and $2 of that goes to benefit Lambert House, Seattle's LGBTQ Youth Center. The quality is seriously amazing, hope you'll tune and tweet your requests and comments!"

Namoli invites you to tweet requests and comments to @Namoli during her show!

It's amazing music and for a great cause! I already have tickets for her fabulous show! With 50% of the profits going to the artist and two dollars of every ticket bought going to the Lambert House Seattle's LGBTQ youth center its a win win!