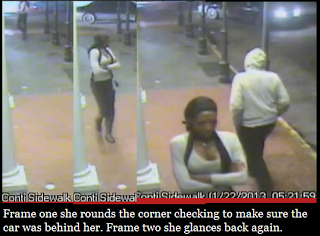 French Quarter Robbery Suspect Might Be a Transgender Woman.

Police are looking for the individual in the video below. They think this person might be a transgender woman but have failed to describe her as such. Instead they have desribed her as a male out of ether transphobia or just plain old ignorance. Maybe both.

But in any case misidentifying and misgendering this person makes her apprehension that much more difficult.

Source: The Times-Picayune, LA, USA "The first suspect -- featured in the above surveillance footage -- was described as a transgendered male with brown skin who's slightly under 6 feet and in his mid-20s to early 30s."

Detective Steve Nolan is in charge of the investigation.

Citizens with information that can help solve these crimes are asked to contact Crimestoppers at 504.822.1111 or toll-free at 877.903.STOP. You could receive a cash reward of up to $1,000 for information leading to an arrest and indictment. You do not have to give your name or testify to receive the reward