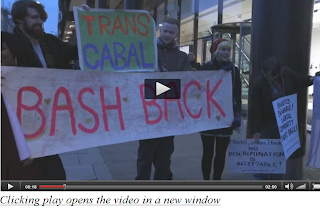 Hundreds of trans people and allies gathered outside the Guardian office in London protesting the publishing of Jule Burchill's hate speech 'Transsexuals should cut it out'. The article was taken down after it became apparent to the Guardian publishers there were enough complaints about it that they might be investigated.

The Guardian/Observer disagrees with the popular belief that left to run amok Bruchill's hate speech would have remained on there website. Today The Observer's readers' editor, Stephen Pritchard announced he will conduct a 'internal investigation' and will publish commentary about that later today.

The Guardian will have to convince the Press Complaints Commission (PCC) that they did not intentionally publish hate speech.

The British are a cynical race. I know, I'm one of them. But if there is one thing that, by and large, we despise it's a bully. Burchill's crossing of the line into baseless bile and hatred comes as no surprise to media hags such as I. But out of such idiocy and blind hatred some good may come. We need idiocy from our enemies, someone who can point out the poison of the mindset that would otherwise seek to hide behind religion and platitudes. Not by protesting against it, but by revealing it to the full glare of media scrutiny. And nothing beats the genuine article. So thanks, Julie, for showing us the content of your aggressive, bullying, hateful attitude. It is an example that we can be inspired to speak up against, to join forces against, to unite ever more forcefully in a quest for our human rights. In the meantime I have little doubt that she sees herself as the victim here, which, to a victim of violent transphobia such as I, is laughable. I can't help but strangely hope, in part, that she manages to limp on as a rabid and discredited commentator. She brings as much harm to her "cause" as to anyone else. On the other hand it would be nice to know that she will be applying for welfare benefits soon. She has certainly blown it as a social commentator. From here on in she's just another bully.