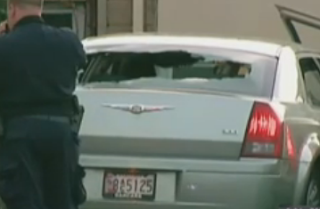 August 2011 Officer Kenneth Furr in a fit of rage jumped onto a car and fired his service revolver five times into it trying to murder the trans women who had just rejected his offer for paid sex.

To the trans community it seemed like a open and shut case of attempted murder but to D.C. Superior Court jury and Judge Russell Canan it was self defense.

The story at the time...

...doesn't fit the crime... According to the Washington Blade Canan sentenced Furr to "five years in prison but suspended all but 14 months of the prison term and credited Furr with the 14 months he already served between the time of his arrest and his trial last October."

"Officer Furr also received three years of supervised probation, a $150 fine, and 100 hours of community service and told to stay away from areas that are known to be populated with trans sex workers."