With the echo's of Newtown ricocheting in our souls we awaken to another evil manifesting itself in an Elementary School. The Aurora School board has by example let it be known to school children physical assaults and verbal abuse of transgender classmates is acceptable and worst yet satisfies cravings to do harm to others different from them.

"We were kicked and pushed by the IFI and associates at the Ad Hoc meeting. They were trying to prevent us from entering the school." Crystal Ann Gray Committee member.

President Obama called on us to protect ALL of our children. He did not say except the children the IFI a designated Hate Group  wish to dehumanize. 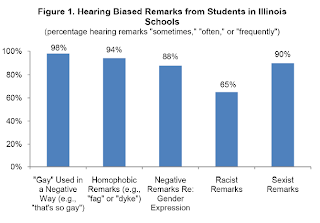 The Aurora School Board disbanded the Ad Hoc Committee during it's December 17th meeting. The committee was just formed by the board to discuss its transgender policy after the outrageous conduct by the IFI at the regular School Board meeting made future discussions impossible. This action effectively ended any hope transgender students in the district had of ever feel safe, respected or  accepted.

"The IFI won this battle but not the war" Crystal Ann Gray president of the Illinois  based United States Transgender Transgender Advocacy told me in a phone call after the meeting.  Ms. Gray one of two transgender Ad Hoc committee members said "They won by intimidating the school board."


Ms Gray who was invited onto the Ad Hoc committee as a expert witness used the  Glsen 2011 Survey  to educate committee members of the inadequacies of the School's anti harassment policies. Gray explained the inexplicable about face the board took "The School Board justified their action by saying that Illinois state law will suffice despite being fully aware it doesn't."

My take? They scared the Board so bad with there petition  calling on their firing the board forgot the reason they unanimously voted for protecting every child in the first place.

The transgender inclusive policies unanimously approved by the Aurora School board are now officially history and so is the School board. They will forever be remembered for what was shouted at them when they rescinded the policy by the parents at that meeting.

They caved to the terrorists, terrorists just like the Al Quaida.