C.d. kirven who along with another person are the people Jerame Davis, executive director of National Stonewall Democrats witnessed being bullied by HRC at the Supreme Court Marriage Equality Rally.

C.d. wants to clear the air and sent this statement on what transpired:

"Happy Easter! The flag belong to Alex Rangel of Get Equal who brought the trans flag at the rally. Brian was waving the flag for Alex as I waved the Bi Pride flag. When HRC asked Brian to remove the flag an argument ensued then another woman walked up to Brian stating she was going to burn the flag while I was having words with the first women then Brian dropped the flag on the ground and ran off crying. 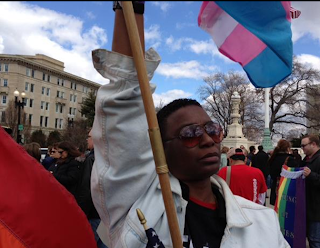 I tried to console him but he kept crying. I grabbed the Trans Pride flag and dared either one to say anything to me. The HRC didn't want the Trans pride flag behind the speakers bc they did not want to explain what it meant to the press. As a matter of fact, the lady from HRC told Brian " This is about marriage equality not the Trans community.

I did pick up the flag from the ground & made sure it was in every shot. I waved it proudly the rest of the rally. I said Trans pride is gay pride and gay pride is Trans pride.

I was forced like the undocumented queer activist to change my speech. Everyone knows I was mistreated the same way he was and since the stories have been released I have told them again but I'm a black lesbian so no one cared! HRC claiming my wording was too aggressive and dark!

My statement as one of the very few asked to change their speech:

"Everyone in the LGBT community knows the HRC has a diversity problem but no serious action has been taken to correct this issue. We will have race & trans protests against HRC starting her in Dallas if serious steps are not taken to become more inclusive of LGBT people of color & the trans community. We are either one in the fight for full federal equality or we are separate seeking justice for ourselves until we make serious changes around diversity our fight for full federal equality will never be attainable."


C.d is featured in the begining of this MSNBC Last Word video proclaiming at the rally:
"We will no longer be satisfied living in the shadows of freedom"

Visit NBCNews.com for breaking news, world news, and news about the economy