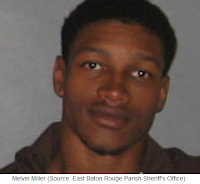 Trigger warning! There's a lot of problematic reporting initiated by the Jefferson Parish Sheriffs office which as a law enforcement agency is obligated to use official records in reports. This was then broadcasted by much of the media without consideration to the victims transgender identity.

Reading the comments on the Sheriffs facebook page it becomes clear that Milan Boudreaux, the slain transgender woman would have wanted to be remembered as such, not as Morris Williams or as a transvestite as reported by much of the media. 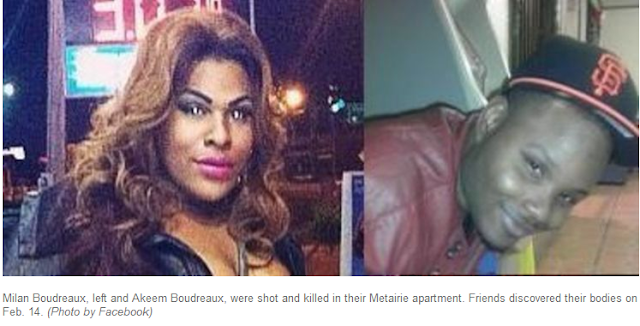 Please click pause after viewing or this video or will continue to run and run and run:(

You may recall on February 14, 2013 JPSO deputies were called to 2209 Edenborn Apt. 3, regarding two badly decomposed bodies inside the apartment. The two victims were Morris Williams (36) of Metairie and Akeen Boudreaux (33) also of Metairie. Investigators determined Williams’ silver Pontiac was missing as well as a lap top computer and an iPhone.

On February 19, Detective Rhonda Goff got word of Baton Rouge Police responding to a domestic call of a fight between a man and a woman. The woman turns out to have been a transvestite, AKA “Jasmine.” The man who fled the scene was Melvin Miller. Miller was driving Morris Williams’ stolen silver Pontiac.

Miller denied being in New Orleans during the estimated time of the murders. However, cell phone records placed Miller in the area where the murders occurred. Detective Goff also learned Miller arrived in Baton Rouge driving Williams’ car and had his possession the victim's computer and cell phone. Miller told Goff, he obtained the vehicle from an unknown black male in Baton Rouge.

Detective Goff got an arrest warrant for two counts of second degree murder. Miller was booked into the East Baton Rouge Jail on a parole violation immediately following the interview by Detective Goff.

Being from the Ohio Valley all I can say is, if the Steubenville Rape Case is part of a
Great Plan...the Planner is
most ill.

Yes and it isn't over yet. Fox news aired the victims first name and Ohio's attourny general is covening a grand jury to force the 18 people to testify who refused to do so. There may even be a lawsuit seeking damages too.