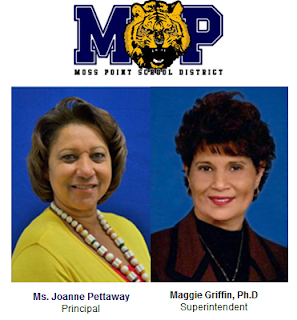 Oh, I'm sure they would like to say this condition has been remedied with the letter sent to parents in response to the SPLC demand letter and the inclusive student handbook but evidence tells us otherwise.

July 2012, not even a year ago, a woman was awarded $100,000 for sexual harassment she suffered at the hands of former Moss Point superintendent Kim Staley.

The woman, Tonya Jackson-Hall was a principal at Kreole Elementary in June 2009 when she sexually assaulted, harassed and terminated.

During the same time period Jackson-Hall was awarded these damages a 16 year old lesbian student was being bullied and punished for reporting it so intensely at Moss Point Magnolia Junior High school by staff and students she quit and tried to kill herself!!

There must be drastic actions, large scale investigations and dismissals if these life threatening conditions are to be rectified.

I have begun a unsolicited action, a petition asking that the president of the Board of Trustees fire the Superintendent and Principal. I am demanding the superintendent pay the consequences for ignoring a condition that undoubtedly exists in all of the schools. To assume this homophobia and transphobia is prevalent and encouraged in only one school in the district is naive to the point it might cost yet more LGBT student's right to education if not there life.

Please sign the petition. You could be saving the life of one of our own.