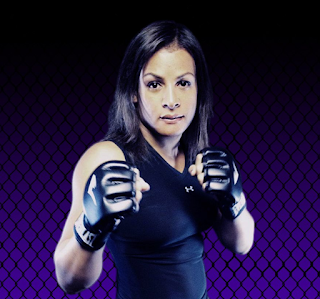 Fallon Fox is a woman, get over it. Instead of crying why don't you give her your best shot?

As a transgender woman I can tell you it's not just ones physical condition that HRT and surgery affect. Male to female transition affects a persons total physiological state usually rendering a feminine psyche. I say usually because there are exceptions and there are extremes. Some MTF's (like myself) love the gentle effects of estrogen and would abhor a violent sport like this.

Fallon Fox is every bit of a woman as I, but she loves to fight. This is her thing and she is good at it. Maybe too good for some peoples liking. Really, you watch these woman fight? They're damn good at it. Cisgender or trans they'll take your head off.

All these transphobes commenting on TMZ, where are you when the average Trans woman gets beaten up by cisgender men and woman? Happens nearly every day. Let me guess, laughing up your sleeves? Cheering?

"I think if you have a Y chromosome in your body, you're a man, no matter what hardware you have surgically removed, changed or done whatever. You're still a man. I talked to a lot of female fighters and they think it's bullshit. I agree with them. There's nothing that changes the fact that Fallon Fox was born a man. So what if he lopped off his junk. I mean hey, you're still a man [laughs]. Fallon's confusion does not transfer over to my confusion. He still has a Y chromosome.

I don't have anything against anybody that's transgender, gay, or whatever. Whatever they do to their own body is their decision. That's just the way it is, and I don't have a problem with that. You can't then expect to cross over and beat the shit out of girls. A transgender league might be a great idea. Maybe Dana White would be interested in that. Sell some tickets, right [laughs]?"

You're a ignorant transphobic bigot. You can dress up your hate anyway you want but at the end of the day thats all you are.

I say let her fight. She knows she's got a bulls eye on her now, So instead of bitchin, why don't you just give her your best shot? She's ready for you.