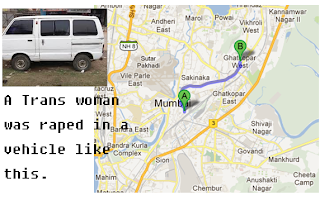 Thursday morning three men kidnapped a transgender woman and raped her repeatedly between Kurla and Ghatkopar Mumbai India. They forced her into the van by threatening to kill her friends then began torturing and raping her over a three hour period before throwing her onto the street.

Source The Indian Express: "The victim said she knew one of the three men, and identified him as Mubarak. We registered a complaint of kidnapping, criminal intimidation and unnatural sex against the three accused," said Police Inspector N Shivle, VB Nagar police station."

"The victim was allegedly burnt with cigarette butts and some kind of chemical was poured on her body, and the police are awaiting medical reports to check if these claims are true."

"After a day-long operation, the police picked up Mubarak Sheikh (25) from the Amrut Nagar slums in Ghatkopar. After being questioned, he was placed under arrest on Thursday evening. DCP (Zone 5) Dhananjay Kulkarni confirmed the arrest."

There also a problematic article at Times of India which repeatly missgenders the victim: Eunuch sexually assaulted in car