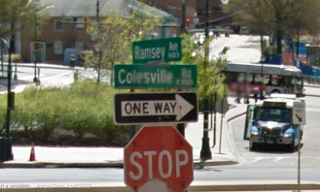 Downtown Silver Springs is a dangerous place. There have been five assaults since March 1st within walking distance of the location a trans woman was beaten March 5th.

Source Silver Spring Patch: Hate crime charges are pending on three men who are accused of beating and kicking a transgendered person and a friend, according to a report from Montgomery County police's 3rd District. 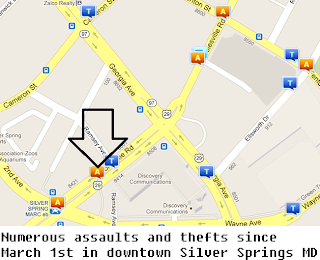 "The victim told police that he and a friend were followed by a group of four people while walking near the intersection of Colesville Road and Ramsey Avenue in downtown Silver Spring around 2:35 p.m. on Tuesday, March 5. The suspects made comments about the victims' sexuality before assaulting the two, according to police."

"The suspects ran away when a bystander tried to help the victims, police said."

"Preliminary charges include three counts of assault and two counts of discriminatory harassment. A 21-year-old male from Baltimore and two men from Washington, DC, ages 22 and 28 were charged in the assault. Read more at : Silver Spring Patch.
Posted by planet trans at 10:04 AM