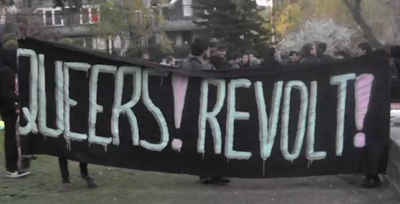 A large group of LGBT activists strode down the middle of Berkeley streets, enraged that one month has passed and still no statement from police detailing exactly who or what killed trans person Kayla Moore while she was in police custody.

Update 3/17 STILL NO new information offered at the police commissioner's regular meeting. How long is since she died while in police custody, a month, almost two?

Anonymous Queers in action angry that the police have only offered a vague statement
believe they are responsible for Moore's death, repeatedly taunted the police. The Berkeley police have announced the will Review the facts Wensday night.