Support Leah, Mississippi High School Senior Who Was "Protested" For Being Transgender 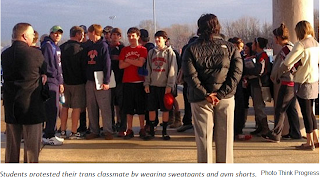 Leah, a trans high school Student was met with a protest by South Panola High School students when she began wearing gender appropriate clothing with the schools blessings.

About a dozen students protested outside their school saying Leah was being afforded special rights. They made their point by wearing clothing defined as inappropriate by the School, sweat suites and shorts. They claimed it was only fair they should be allowed to dress that way since Leah a Male to Female trans woman, who in there opinion is male, was being allowed to wear female clothing.

What in reality was happening is this. They are a bunch of high school bigots and this was a way they thought they could express there transphobia without being directly called out for it. Well I'm calling you out for it. You're bigots.

In response to this transphobia a facebook page was started called Mississippians Support Leah which posted this statement:

1. There is no "special treatment" going on here, well unless you call equal application of the law "special treatment".
2. The School District's policy requiring "gender appropriate" dress is unconstitutional as it is very much settled law that gender expression is protected under the 1st Amendment, among others, to the Constitution.
3.... The District will change their policy and remove "gender appropriate" dress as part of the dress code as it is unconstitutional from its initial installation, nothing anyone says or does will prevent this from happening -- see #1.
4. Any religious arguments in opposition are irrelevant as they are clearly unconstitutional according to the US Supreme Court and this area is very much long settled law.
5. God, Jesus, etc. have never left public schools as students and school staff may pray and express their faith as long as it is not disruptive to the educational environment and is not sponsored or interpreted to be sponsored by the school (aka state aka government). If you desire a religious-focused curriculum that is your right and you should consider a private religious school to satisfy your needs as it is not your right to force public schools to violate the law through a religiously endorsed curriculum.
6. This is the 21st Century and change is coming to even the darkest of places and will continue to shed light on us all -- either you can accept this and abide by the law or move aside as this express change train is coming through

It's all pretty simple really. "

There was also a facebook page in opposition to Leah "pray for South Panola School District" but it has since been taken down after only reciving a dozen likes. A parody of that facebook page SUPER prayers for south panola school district remains up.