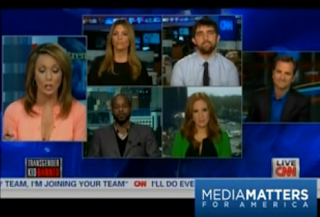 From Media Matters: "During the February 27 edition of CNN Newsroom, host Brooke Baldwin led a panel discussion about Coy Mathis, a 6-year-old Colorado transgender girl who is suing her school district for the right to use female restrooms at her elementary school."

"Everyone on the panel expressed support for Mathis' position except for Dr. James Sears, co-host of the CBS show The Doctors. Sears, who is a pediatrician and television personality, warned that Mathis might walk around the girls' bathroom with her penis exposed, like "most boys" allegedly do at that age":

Meet this individual who uses his position as a "doctor" to amplify vile transphobia on the show "CNN Doctors".

Pediatrician Dr. James Sears On CNN: Coy Mathis Will Walk Around The Girls Room With Her Penis Out, Like all Boys Do.
Posted by planet trans at 9:33 AM

What a totally ignorant thing to say. Obviously this guy is such an expert in trans issues. If we use his logic, then we could say that all doctors on TV shows are intolerant, ignorant boobs, who will say anything for ratings.

I am a transwoman that lived my youth in the male role and used the "Boys" bathroom. Sorry Dr. Sears but I don't recall boys waking around the bathroom with their penises exposed. One thing I am very sure of, that you were not the pediatrician of my children with the complete lack of empathy and insight you seem to have on the socialization and developmental process of children. That you are willing to create a life of absolute stress and oppression for this little girl is unforgivable. You are everything that the transgender people dread in today's medicine.