Be Aware the SICK new "Knock Out Game" It's a real threat to transgender people. 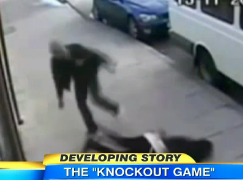 Transgender and LGB people were not mentioned as potential targets but we know all too well this sort of violence..."It's a chilling trend being felt across the country with incidents reported in Philadelphia, new york, Connecticut and Pittsburgh. Victims left injured and stunned. Footage of the attack caught on surveillance cameras or posted online by the attackers themselves." ~ More at ABC news