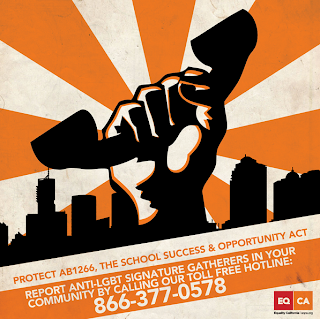 Prohibits any person from being subjected to discrimination on the basis of disability, gender, nationality, race or ethnicity, religion, sexual orientation, or any other characteristic that is contained in the definition of hate crimes in the Penal Code, in any program or activity conducted by an educational institution that receives, or benefits from, state financial assistance or enrolls pupils who receive state student financial aid.

Prohibits discrimination on the basis of the characteristics listed in #1 in any aspect of the operation of alternative schools or charter schools.

Map Light reports  that thirty one organizations financially supported AB 1266 and contributed $1,564,675 to its passage, the top supporter being the Teachers Union which gave $1,067,875. Four organizations opposed it's passage giving $53,528 to defeat it.

California teachers felt so strongly that they gave one million, sixty seven thousand and eight hundred seventy five dollars in support of its passage. That says a lot. Teachers, the ones in the classrooms understand how important it is to give every child a opportunity.


California teachers fully understand that this law does not infringe of any child's right to privacy. 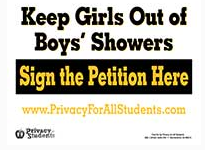 There are four very powerful well funded and organized groups who are opposed to AB 1266 all coalescing into the disingenuously named group "Privacy for all students". 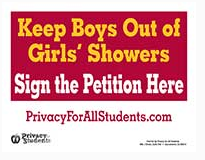 "Privacy for all students" has already contracted Mission Public Affairs which successfully managed the Prop 8 fight against marriage equality in California.  All of these and many more are being amplified by the right wing media source WND, which has been designated a hate group by the Southern Poverty Law Center.

What can I do? I 'm just a quite law abiding California citizen doing everyday things?

You can help by photographing and recording these professional signature gatherers. They could care less about ethics, they are paid on their performance and will stoop to any depth to get that next signature even if there behaviour would invalidate that signature.

There are very strict guidelines set up by the  state validating not only the gatherer but those who sign.

They only have a few days left so as far as they are concerned all bets are off.

What are signature pros telling California citizens that would be considered illegal? Listen to this:

Every person is guilty of a misdemeanor who:
(a) Circulating, as principal or agent, or having charge or
control of the circulation of, or obtaining signatures to, any state
or local initiative, referendum or recall petition, intentionally
misrepresents or intentionally makes any false statement concerning
the contents, purport or effect of the petition to any person who
signs, or who desires to sign, or who is requested to sign, or who
makes inquiries with reference to it, or to whom it is presented for
his or her signature.

(b) Willfully and knowingly circulates, publishes, or exhibits any
false statement or misrepresentation concerning the contents,
purport or effect of any state or local initiative, referendum, or
recall petition for the purpose of obtaining any signature to, or
persuading or influencing any person to sign, that petition.

(c) Circulating, as principal or agent, or having charge or
control of the circulation of, or obtaining signatures to, any state
or local initiative, intentionally makes any false statement in
response to any inquiry by any voter as to whether he or she is a
paid signature gatherer or a volunteer.


Stay up to date and connect with other activists online. Join online rallies and share news and action alerts with your friends and family.