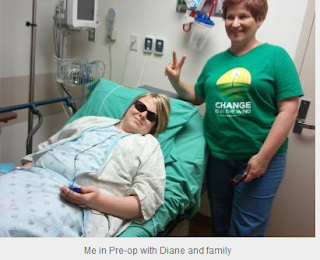 Mika Covington is a genderqueer who prefers the pronouns sie and hir. Sie lives with end stage (stage 5) Nephropathic Cystinosis which affects approximately 1 in 100,000 to 200,000 newborns. There are only around 2,000 known individuals with cystinosis in the world.

Mika had alledged in a blog post tha sie has since removed, that the University of Nebraska Medical Center had refused to perform a kidney transplant after learning of Mika's transgender status.

Mika Covington has since messsaged me via facebook that sie is concerned about possible legal actions and therefore has taken hir blog post down.

This leaves me without an unattributable article and in a very bad position. I will leave this post up with the statement I received from the Nebraska Medical center and will update it as necessary.

Update 11/13/2013. Mika Covington messaged me regarding my taking down the planetransgender post down:


" I still stand by what I said in my post. But, I would point out that no where in my post did I state the University explicitly denied on basis of gender identity or political party preference/identification. Nevertheless, I did include in my post that I had issues because of being gender identity and political party preference/identification. In addition, I must state that I never gave Queerty or the Daily Kos to do a story on my Cystinosis and gender identity."
"Thank you again for writing a post on what was said in my blog."

Taylor Wilson, Senior Media Relations Coordinator at the Nebraska Medical Center has emailed me with this statement:

"We have performed thousands of transplants over the last 40 years. Patients are never rejected based on gender, race or religion. EVER. Organ transplant is highly regulated by the government and politics is never part of the discussion. Without consent from the patient, we can't comment specifically about this case. However, we can say that each prospective transplant recipient has to attend appointments on a regular basis and complete a variety of tests before being eligible for transplant. We want to make sure each patient takes the utmost care of the gift of life they're being given, both immediately after the transplant and for years to come."

"Our institution is filled with talented, caring individuals who strive to provide the highest quality care to everyone. We provide care to the sickest of the sick and often become a place of refuge when other bigger-name centers have turned them down. One of our recent transplant patients may have said it best in this video:"

Please let me know if you have any further questions.
Taylor Wilson
Senior Media Relations Coordinator
The Nebraska Medical Center

Mr. Wilson said they have not received the needed consent form from Mika they need to address this case specifically he wanted to respond in general to this blog post.

Mika has tweeted a number of time sie has emailed the Nebraska Medical center but has yet to receive the consent form.

Thank you for covering this! It warms my heart to hear other people are concerned with how I was treated.

Unbelievable. As a trans girl with multiple congenital heart defects needing a pacemaker and periodic surgery, this story chills me. The hypocratic oath is Do No Harm. Not Do No Harm, Except To Queers. These medical "professionals" should remember that.

My heart aches that Mika has had to endure this discrimination. I have heard "first, do no harm" and "treat the patient in front of you" for ethical behavior of a physician. I have wondered if the Neb. Medical Center is not only homophobic/transphobic, but they have an agenda of only taking patients who don't have underlying chronic conditions who might make their longevity results look not as good. God bless, Mika. May she continue to be brave.

Minor grammar question, why not use "hir" instead of "sie's"? I think it reads better.

Also there's ambiguous capitalization in the post, sometimes "sie" is capitalized as a proper noun, which makes it seem like a name, other times its lower case. Also there's a sentence starting with "and despite," bare minimum it should be capitalized, but ideally it would be connected to the sentence it is referencing :)

Not trying to be nitpicky, just the editor in me coming out

Mika I just tried to do your story justice. You have such a wonderful forgiving loving soul. I'm so relieved you liked the article. I still want to embbed the video you posted. Thank you for sharing and reading Mika. Please let me know if there is anything I can do for you.

Well looking at the vid above, DailyKos is at least a bit wrong.