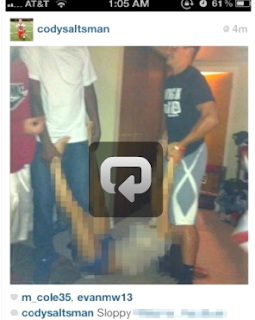 An underage girl was repeatably raped by a football team dragged unconscious from party to party across state lines while party goers recorded her being raped and posted those recordings online.

Incredibly mainstream Media remained silent about it and many in the town openly sided with the rapists.

Anonymous was outraged and and called on social media to act and publicly Dox'd the rapists names. Anymomus was rewarded with a visit from the federal law enforcement who invaded the hactivist's house who exposed this atrocity.

With the pompous moral grandstanding of the OHIO Attorney general I find it ironic that the Russian news is reporting this for what it is "Four officials charged in Anonymous-propelled Steubenville rape case" .

So we, the people are forcing justice to happen DESPITE the school's attempted cover up and worse yet the egregiousness of American law enforcements who were complicit with these criminals.

Source Post Gazette:  -- The rape investigation that brought the national spotlight to Steubenville, Ohio, has ended with the indictments of the city's school superintendent and three others connected to the school district.

A special grand jury on Friday indicted superintendent Michael McVey, 50, along with a principal, a wrestling coach and a former assistant football coach on charges related to failing to report or hiding evidence of the sexual assault of a 16-year-old girl by two football players after a drinking party in 2012. The charges were announced Monday.

While players Trent Mays and Ma'Lik Richmond were convicted in March, observers had wondered whether others tied to the district and its powerful Big Red football team would becalled to account.

According to DeWine’s department, Superintendent McVey stands to face a maximum of nearly eight years in prison if convicted on all counts. Belerdine, 26, stands to face at the most one year and 265 days in jail, and Fluharty and Gorman could each get away with serving only one month for their alleged crimes.

REALLY? That was the same response we got when we started demanding justice.

“Some may ask why others were not indicted,” DeWine said during Monday’s presser. “It is simply not sufficient that person’s behavior was reprehensible, disgusting, mean-spirited, or just plain stupid,” he said.