Tullytown PA police did this to a 14 year old? 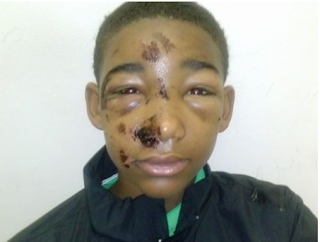 Accounts differ about what transpired but somehow this fourteen year old's nose was broken and got both eyes damaged. The burn marks on his face are from being tasered which according to the only news report I could find happened while running from police handcuffed behind his back. Supposedly the police became 'worried' for his safety as he approached RT13 and tasered him. Did they then beat him? His mother said they wouldn't let her see him for three days after this happened.

23 hours ago · Edited
This is my 14 yr old son who was brutually tortured By 2 Tully town officers he was handcuff but they say he resisted arrest that yall tazzed him in his face ...not only that they took him to lower bucks hospital with out his mother consent they broke his nose n both eyes were swollen shut these prejudice cops need a rude awakening any one know anyone that can help my son please help they took him to the police station n told me I could not come up there but as a mother who loves her child I did Go to the station they would not let me n at all they talked to me through the door I didn't see my son for tree days n the cops says o he's fine we ordered him pizza really? Any one who can help me get justice please comment I'm torn mad angry just can't deal # HELP
— with So Versatile and 10 others.
Posted by planet trans at 5:47 PM