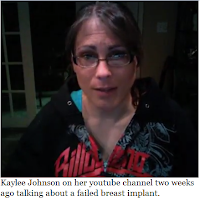 The mainstream media taking cues from police have identified Kaylee Johnson by her birth name and have since been misgendering her using male pronouns. According to friends and relatives Kaylee was just beginning to come terms with her authentic gender and was trying to cope with transition.

The police believe Kaylee jumped off the overpass because her car was located approximately over where her body was found, however earlier reports indicated she was decapitated. Police have refused comment on that.

I have been following her on youtube sine she began. I miss her so much and I hope we all will learn something from her.

How many more until society leaves us alone?

The image is of Kaylee's girlfriend Amy. Just wanted to let you know.

Thank you CindyLatta, my apologies. I have changed the picture.