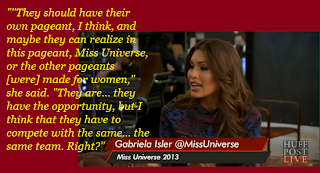 Gabriela Isler is delightful, gorgeous and a transgender exclusionary bigoted cisgender woman. Isler made it known she does not think whats good for the goose is also good for the transgender

During the interview it was observed that the crown fell off her at first. Isler explained the person crowning her was petite and at that moment the crown didn't fit her "It's mine and it was made for me and fits me (sic) very well".

I question whether that crown would have been such a perfect fit antes.

Giselle Castro at Quemas Mama Latinas notes that "I personally believe there's nothing wrong with getting a little plastic surgery here and there if a person decides they need it. In Isler's case, it's hard to deny that she looks like a completely different person in her after picture!"

Gabriela said she claimed this victory for 'all people of Venezuela' further excluding transgender Venezuelans who she doesn't believe are real people.

Miss Universe: Transgender People 'Should Have Their Own Pageant'

@kellibusey @MissV_Universo @MissUniverse I thought miss you universe was supposed to be role model? role mods believe in equality!

TransGriot has more on this. Lots more.