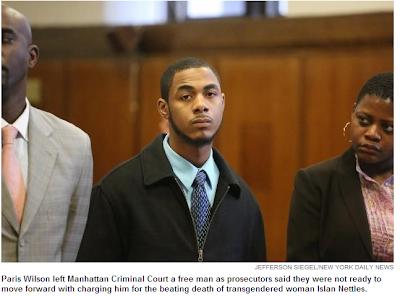 On the eve of the TDOR Paris Wilson walked out of court a free man. Wilson was charged with misdemeanor assault in connection with brutal beating death of NYC transgender woman Islan Nettles.

After Islan died in the hospital it was fully expected that the charges against Wilson would be elevated and prosecuted as a hate crime.

It was wittnesed  that Wilson made a pass at Ms. Nettles and became enraged, beating her to death in a fit of trans panic.

The time ran out for the prosecutors after the "speedy trial clock" 90 day limit expired on Tuesday.

Another unnamed man confessed to the murder but said he was too drunk to remember doing it. That man was allegedly taken to the police station by the mother of Paris Wilson who pressured him to make a false confession. That individual was not arrested because of inaccuracies in his confession.

"Emotions were flying all over. Happy, sad, more upset than anything," said grief-stricken Delores Nettles Islan's mother. "And then to see him walking out. And my baby can't come home."

Members of the transgendered community were present in court to support the Nettles family.

We can continue reminding Assistant District Attorney Nicholas Viorst with the care2 petition Justice for Islan Nettles that our lives matter.

What is going on? Why isn't this government doing its job? I posted this on my facebook to spread the word. We need a transgender wall so we never forget those we get attacked.