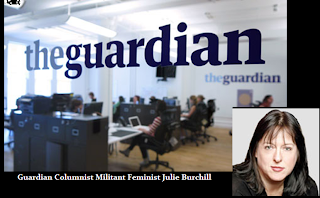 The Guardian published Julie Burchill's trans toxic tirade in response to the slightly less offensive article Seeing red: the power of female anger but then deleted it after the experiencing the international transgender community outrage.

But that fact does not exonerate the Guardian nor does cries for freedom of speech or ignorance excuse the publishing of Burchills article in the first place.


Protection from discrimination
Under the terms of Clause 12 (Discrimination), (i) "the press must avoid prejudicial or pejorative reference to an individual's race, colour, religion, gender, sexual orientation or to any physical or mental illness or disability". In addition, part (ii) makes clear that "details of an individual's race, colour, religion, sexual orientation, physical or mental illness or disability must be avoided unless genuinely relevant to the story". While the Commission does not regard transgender status or gender dysphoria as constituting an "illness or disability", it does consider that the terms of Clause 12 - parts (i) and (ii) - encompass transgender status and gender dysphoria.

Editors should consider carefully the language they employ to refer to individuals of transgender status, taking care to ensure that it is not pejorative or discriminatory. PCC staff members are available to provide Code advice on this issue, including guidance on previous rulings. Groups with expertise in this area have produced specialist guidance for journalists and are available to advise on individual cases (see below), although it is important to note that there is a range of views within the community on terminology issues.

Editors should also be aware of the issue of relevance. It may be useful to assess whether a story would be considered newsworthy if it did not concern an individual of transgender status, and if so, whether the individual's status is genuinely relevant.

its encouraging that the Guardian Published the PCC update thereby acknowledging their responsibility. Now, lets see if the UK's notoriously irresponsible media lives up to there responsibilities as well.

Read the Press Complaints Commision's in full here.
Posted by planet trans at 10:56 AM

We are starting to gain support in our world. Thank you for sharing :)