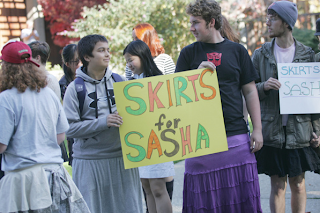 Sarah Hoffman reminds us a march was held in Oakland last night for Sasha who identifies as A Gender.

Sasha's skirt was set on fire by Richard Thomas after falling asleep on on a city bus on the way home.

16 year old Thomas was charged as an adult with this hate crime after telling police he did because he was homophobic. The crime was also caught on surveillance video but police haven't released it saying its too disturbing.