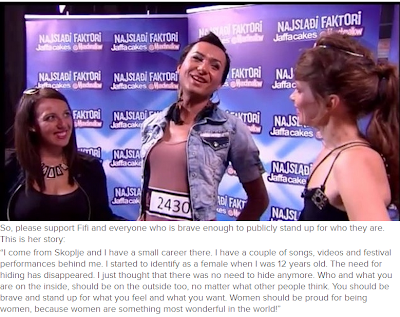 Ok, so what happened? Buzz Feed's lazaralazara interpreted the video of her appearance embedded below:

After Fifi’s introduction, judge Kristina Kovač checked with her in which gender she wants to be addressed to and Fifi said – „female“. This is when Željko Joksimović interrupted the conversation with the first transphobic and discriminatory remark:
„Wait wait, sorry, I don’t understand something here. Fifi, in your application it says Filip. How can we then address to you as a female?!“
„Well, I was born as a male and I identify as a female, I am transgender“
„You are a tranny (?). Crazy.“ said Joksimović.

What followed doesn't need much translation. It's obvious by FiFi's eyes narrowing she is being degraded even more by Joksimović who demands that 'both of him' sing another song.

Fifi brings the house down with a rendition from her heart of 'words don't bring me down'. delivering a love smack down to Željko Joksimović.

Serbia has laws against hate speech based on a persons sexual orientation.

Gayten LGBT Center to promote LGBT rights and Labrys, lesbian human rights , strongly condemns last night's behavior one of the judges on the show X Factor Adria, which is broadcast on the television channel Pink. reality show in a competition which aired 5 November, the pop singer Zeljko Joksimovic showed a basic lack of respect for competitors who identifies as transgender . Joksimovic is in direct communication with Philip Janevski - Fifi (22) , showed disrespect first, then disbelief and disgust and eventually discredit her as a competitor on the basis of her gender identity, rather than on her singing abilities (Joksimovic at one point and says: "This is not like me ... and well sing"). Zeljko Joksimovic as a public figure has the responsibility for what is pronounced in a public space. Equally important, he shows a basic ignorance of the law on gender expression, and we believe that it violates the Law Against Discrimination , according to a person on the basis of her personal property, not on the basis of her vocal ability. Thus, Zeljko Joksimovic contribute even more difficult position trans people in Serbia who are exposed to daily violence and discrimination at multiple levels. By April 2013th has recorded 78 cases of murders of trans people in the world, according to the report Trans Murder Monitoring , organization Transgender Europe (upon TGEU), published to mark the International Day Against Homophobia and Transphobia and the vicious murder of Darko Vujanovic in June this year rapid and effective response of the Commissioner for Equality and reaction RBA, and a public apology pop singer Zeljko Joksimovic and TV Pink. Belgrade, 6 November 2013th
X Factor Serbia producers didn't think Жељко Јоксимовић's comments were hate speech. Quite the opposite it seems that they will turn a blind eye to transphobic hate speech on their show if it builds a audience.  X Factor producers statement:

Contestant Philip Janevski Fifi is auditioning for Singing Shows program "X Factor" a second round of competition thanks to his voice and stage performance. The jury "X Factor": Zeljko Joksimovic, Kristina Kovac, Emina Jahović and Kiki Lesendrić are entitled to their own opinion about the registered competitors.

Produced by "X Factor" believes that no member of the jury has not used the hate speech in a fit athlete Philip Janevski, and on the further marketing of the aforementioned athletes will decide the audience.