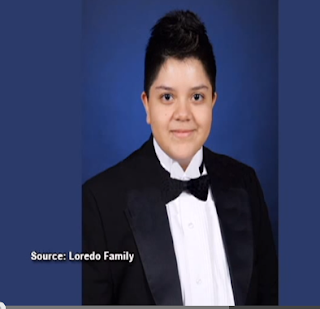 "When I found out about this I almost didn't want to take it" Jeydon told Action 4 news meaning the picture but his sentiment could mean, and has meant so much more to other trans youth facing discrimination from schools.
The Burnt Orange Reports that the Southern Law Center (SPLC) will take legal action by November 21'st if Jeydons picture is not in the yearbook.

Being a transgender Texan only a few miles away I find this sort of discrimination appalling. Texans are better than that and we know it.

Both HRC and the Southern Law Center have become involved asking the school board to respect Jeydon but in the correspondence form the Board the continued to misgender Jeydon and use his birth name.

The SPLC's demand letter describes how refusing to include the photograph violates the student’s freedom of expression, which is protected by the First Amendment. It also violates the Equal Protection Clause of the 14th Amendment, which protects the student from discrimination, as well as Title IX, which bars discrimination on the basis of sex by any education program receiving federal money. Refusing to publish the photograph would even violate the school district’s own anti-discrimination policies.


Call it out: Yearbooks are for memories not discrimination!

The theme for La Feria High School's yearbook shouldn’t be discrimination.
But officials at the Texas school want to stop Jeydon Loredo, a male student, from being featured in the yearbook wearing his tuxedo like every other boy, simply because he’s transgender.
This kind of discrimination isn't just wrong - it's in direct violation of federal law and the school's very own policies.
The issue has been appealed to the school board with the help of our partners in this effort, the Southern Poverty Law Center. Jeydon’s family has asked equality supporters like you to help ensure that Jeydon can appear in the school’s yearbook wearing his tuxedo.
Tell the La Feria School Board to take decisive and clear action: Let Jeydon’s tuxedo photo appear in the yearbook alongside his friends and classmates. Discrimination against transgender students is a violation of school values.

Click here to send your message to the La Feria school board.