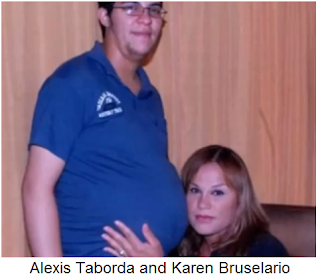 (APF Agence France-Presse) The bride was born a man. The groom was born a woman. And when the Argentine couple wed Friday, it was the first time in the country that a groom tied the knot pregnant.

Argentina in 2010 was the first country in Latin America to allow same-sex marriage. And two years later, it passed a law allowing transsexuals to get national IDs listing the gender with which they identify themselves.

So when Karen Bruselario wed Alexis Taborda in the northeastern city of Victoria, it was another big step on their journey together after meeting in Buenos Aires as activists for transsexual and transgender rights.

“It was a very emotional day, unique, really special because a dream came true for us. We had a civil marriage,” Taborda, 26, told AFP by phone.

Their next big step: Taborda, who legally is male as he self-identifies as such, is 36 weeks pregnant, with the couple’s first child. Neither had sex reassignment surgery.

Taborda and Bruselario, 28, said they would like to marry in a Catholic church.

So they sent an email to Argentine-born Pope Francis about their case. They have yet to receive a response from the pontiff.

They claim to be the first couple of two transsexuals to wed here who have not had reassignment surgery.

Taborda admitted that he does not feel a lot of maternal instinct though he is ready to give birth December 22 by Cesarean section to a girl the couple wants to name Genesis Angelina.

“It’s really weird to see Karen dying to feel the baby’s kicks or to have my symptoms,” he said.

For captions in your language click CC, then turn captions on and after clicking options a drop down menu will apperar allowing you a wide choice of languages to choose from.