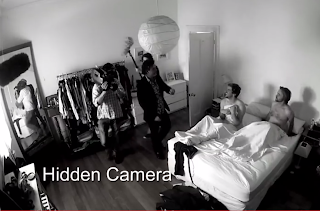 BAMBOOZLED won first prize at Australia's Tropfest which claims to be the worlds largest short film festival. About 2/3 of You tube'r's thought it was funny.

My guess would be most of the 1/3 of the thumbs down came from LGBT people but then I've been wrong once before.
I won't add my 2 cents until after you watch it.

So right on the heels of The Dallas Buyers Club comes another movie that makes a mockery of transsexulism but this time the movie also makes a joke of same sex attractions.

So to all the gay people ho ballyhooed our disapproval of the Dallas Buyers club, well, welcome to the club.

Most every review I have read, except the inevitable leech sites that make revenue by saying it was simply fabulous, all have all said the same thing. It reeked. It's an embarrassment to Australia.

Ok so lets say that both are out gay people but one of them was a skin head who only went to bed with white men. What if it turned out the black man he just bed'd fooled him into thinking he had a skin pigment change but in reality was really always black?

"BAMBOOZLED" would then be offensive to a different larger more vocal minority and subsequently social unacceptable. Duh.

There's a petition demanding an apology from Tropfest. I signed it,