SPLC files Lawsuit after Principal tells student “I don’t want a dyke in this school." 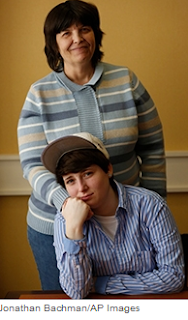 Via SPLC: The Southern Poverty Law Center filed suit in federal court today to stop pervasive anti-LGBT bullying and harassment committed by students – and even faculty members and administrators – within the schools of Mississippi’s Moss Point School District.


The lawsuit was filed on behalf of Destin Holmes, a district student who endured such severe harassment she was eventually driven out of school. She temporarily left the district in March 2012 to be homeschooled after the then-principal at Magnolia Junior High School called her a “pathetic fool” and told her, “I don’t want a dyke in this school.”
The SPLC demanded in March that the district take immediate action to end the bullying and harassment. The demand came after an investigation found that district students, faculty and administrators have targeted lesbian, gay, bisexual and transgender (LGBT) students because of their actual or perceived sexual orientation and nonconformity to gender stereotypes. A mutually agreeable resolution that would protect and preserve the rights of students like Destin was not reached.
“We are disappointed that the district fails to see the serious harm its deliberate inaction causes its students,” said Anjali Nair, SPLC staff attorney. “District officials who are entrusted with the safety and education of all students not only ignored, dismissed and even blamed victims for the abusive behavior of faculty and other students, they also participated in discriminatory acts.”
During her time at Magnolia Junior High School, students and district staff called Destin slurs such as “it,” “freak” and “he-she.” Destin heard such insults as many as 20 times a day. She also was denied access to the girls’ restroom by a teacher. Another teacher even refused to allow her to participate in a classroom activity where teams were divided by gender because Destin – according to the teacher – was an “in-between it.

Full story at the SPLC