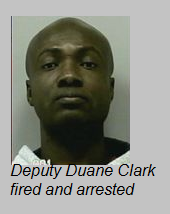 An unnamed Georgia transgender man has filled a federal lawsuit alleging he was sexually assaulted repeatedly by former Gwinnett County Deputy Duane Clark while incarcerated in January of 2012.

WSBTV is reporting that former Deputy Duane Clark, 40, was fired and arrested for sexual assault of the inmate and violation of oath by a public officer following the 2012 incident. The now former inmate said the sexual assaults happened repeatedly for almost a month while he was in the jail during January 2012.

His attorney Jeff Sliz says the county is accountable because they had closed circuit TV but only one guard per Pod so there was no one to stop the rapes.