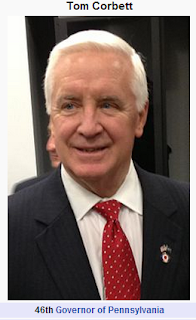 Nestled on the edge of progressive New England Pennsylvania developed quite a reputation for transphoboia during the Sheena Monnin affair. Even more troubling, indicating a breakdown of morality the systemic cover up and subsequent conviction of Penn State's Jerry Sandusky.

As Attorney General Corbett convened a grand jury in 2009 to investigate longstanding allegations of child sexual abuse by former Penn State assistant football coach Jerry Sandusky.The grand jury uncovered evidence of criminal misconduct, and a 40-count indictment against Sandusky was issued in 2011, ultimately leading to Sandusky's criminal conviction in 2012. Corbett has been criticized for the three year time span between the grand jury investigation and Sandusky's indictment, and for his gubernatorial staff approving a $3 million grant to Sandusky's Second Mile charity for children, which, according to the grand jury findings, served as a repository for potential sex-abuse victims. Former FBI Director Louis Freeh's report on the Penn State scandal did not fault Corbett's handling of the Sandusky case. (Wiki)

But now Gov.Tom  Corbett is saying enough is enough.

Pennsylvania is one the path to a turnaround now that Corbett has signed a child-abuse laws inspired by Jerry Sandusky, priest cases. And the Governor and is now backing HB 300, a state transgender inclusive amendment to the states human rights bill passed in October 1955 which has earned the distinction as having a record number of Republican and Democrat co sponsors.

The main opposition to HB 300 is incredibly a Catholic group from the 8th District.

The results of a Google search indicate there have been no incidents of inappropriate behaviour by transgender people in any of the 26 PA municipalities which have public accommodations provisions for transgender people I.E. the bathroom.

Inversely goggling "PA Priest scandal" returns a multitude of news stories indicating the Catholic Church is infested with men who sexually assault children undoubtedly some occurring in the boys bathroom.

A list of PA priests convicted in a court of law of pedophilia by bishop accountability.org shows there have been dozens incarcerated but that's just the tip of the iceberg. The unheralded stories of incredible grief and suicide by children must be staggering.

Catholics, clean your house of these criminals and stop discriminating against law abiding citizens.