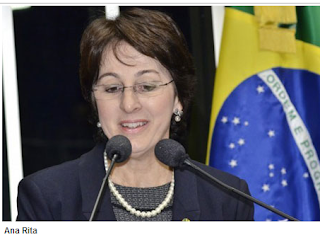 Senator Ana Rita is calling for a vote on a bill that could give an additional three years in prison for hate crimes committed against LGBT people.

They don't hate the perpetrators of crimes against LGBT people in their country which year after year has led the world in LGBT murders.


The Global Rights report includes statistics from the Brazilian Secretariat of Human Rights that indicate trans Brazilians accounted for slightly more than half of the 300 reported LGBT murder victims in the country last year. The group noted an estimated 52 percent of them were people of color.
Grupo Gay da Bahia, a Brazilian advocacy group that has tracked anti-LGBT violence in Brazil for nearly two decades, said it saw a 21 percent increase in LGBT murders in the country between 2011 and 2012. The organization reported 128 of the 338 reported LGBT homicide victims in Brazil in 2012 were trans. ~ Washington Blade.