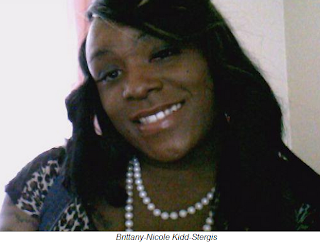 Cleveland resident transgender woman Brittany-Nicole Kidd-Stergis was found shot to death in her car Friday night according to the Plain Dealer. Much to the credit of the Plain Dealer they contacted a local trans advocate who said her murder has all the earmarks of a hate crime.

The police are not saying her murder was a hate crime but have not ruled out the possibility.

This makes two transgender woman murdered in the past week and three recently in North East Ohio.. Just a couple days ago Betty Janet Skinner 52, a disabled trans woman was found beaten to death in her apartment. In January 2012 Cemia Acoff was found tied to a concrete block in a pond. Andre L. Bridges was arrested and later sentenced to life for her murder.