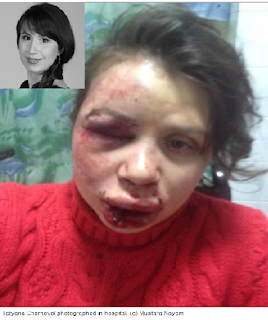 In a short period of time, since November 22 there has been an onslaught targeting Ukrainian activist who want closer ties with the EU. But the violence doesn't stop there. Its now being directed towards LGBT people  and journalists as well.

U.S. Embassy in Kyiv condemned the attack on Chornovol in the statement it released on Dec. 25. The embassy called for an investigation, "which unlike previous such incidents must result in those responsible being held fully accountable under the law."

Watch this video from the dashboard camera in Tetiana Chornovol's car as they force her to stop the day after she posted about Ukrainian Minister of Internal Affairs Vitaliy Yuriyovych Zakharchenko extravagant new home.

"They didn't say anything. They were just beating." Tetiana Chornovo from her hospital bed.

Who would do such a thing? Most say these criminals are ether tied to Ukrainian president Viktor Yanukovych or working for him indirectly.

You can watch a video stream from Kiev protest site via UStream.

Options
Delegation of the European Union to Ukraine · 4,742 like this
7 hours ago ·
Live from the protest at Kiev # Êvromajdan # Evromajdan #Euromaidan