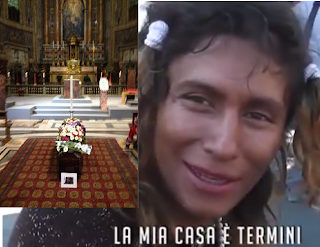 Unclaimed by her family unwanted by society Andrea Quintero's lay since June, unburied. Call it Divine intervention after years of hate from Pope Benedict, his successor Pope Francis's own church stepped in to give her a burial.

And they did it respectfully.

(ANSAmed) - ROME, DECEMBER 27 - The funeral Andrea Quintero, the Columbian trans killed with sticks in Rome, there were more than a hundred people, including the Minister Kyenge, Mayor Marino and Vladimir Luxuria. To officiate the Mass Archbishop Fierce, director of Caritas and his father Giovanni La Manna, director of the Center Astalli. In his homily, Andrea has always been defined as 'she'. It is "an important gesture - said Marino - a gesture of a church that is renewed under the leadership of Pope Francis."

The National Catholic Reporter hasn't got the memo from the Pope so I edited the story as nessacary.

If anyone wants an example of what the emphasis on mercy under Pope Francis looks like in action, they’ll find one this afternoon in Rome at the Church of the Gesù, the mother church of the pope’s Jesuit order, where a funeral will be celebrated for a Colombian transgendered and homeless person beaten to death five months ago.

The body of Andrea Quintero, who struggled with drug addiction and lived on the streets in the area around Rome’s main Termini train station, was found alongside a track in the station on July 29. An investigation concluded he she died as a result of injuries from a severe beating.

Quintero, 28 at the time, had left his her family in Colombia four years before. He she was well known to personnel at the station and to charity workers, calling himself herself the “Trans of Termini.”

A week before his death, he gave a brief video interview to the Italian paper Corriere della Sera in which he described having a paralyzed arm and walking with a limp as a result of a previous beating.

Video Discription: Among travelers who each day ran to catch the train at the station just did to her case. For all the tranny was speaking, the one who spent her days along the tracks or in front of the entrance to the station to collect the butts in the ashtray to glean a bit of tobacco. Another unnamed desparate and no history to fill the ranks of the homeless people. Andrea was only 28 years old and was Colombian. She had one leg and one arm paralyzed for an aggression suffered in Ostia. The night of 28 July 29, 2013 and someone has massacred by the barrel; her body was found dropped to the track 10.

She did not speak with anyone, did not trust easily. Most of the time she was sitting staring at the empty. Or trailed, one step at a time toward the 714 bus shelter that would have brought to the table of the Caritas of Colle Oppio. When understood to have confidence, though, changed expression, her face sunburned is illuminated. So, six days before her death had told us her story, the pain and violence suffered, and confided her hopes. In spite of everything.
Video edited by Gabriella Lanza.