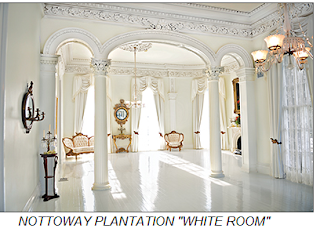 A storm has engulfed a well know white feminist singer Ani DiFranco since she announced a "Righteous Retreat" in the iconic monument to slavery, the Nottoway Plantation. By all accounts DiFranco isn't listening even deleting threads critical of her on the events facebook page.


But hey, but maybe the plantation is doing good in the world now. Maybe the profits from this and other activites are being used for the good of humankind, or maybe not. PQ Monthly reports that

So why hold the Retreat at the Nottoway Plantation? In order to inform my outrage I wanted to know who benefits from the continued existence of the Nottoway Plantation. It is listed on the National Register of Historic Places, but is owned and operated privately by Nottoway Plantation Inc. Nottoway Plantation Inc., with annual revenue of $2.5 to 5 million is owned by the Paul Ramsay Group. The Paul Ramsay Group, interestingly enough, is the investment arm of Australia’s thirteenth richest billionaire Paul Ramsay, a healthcare mogul well known in Australia for donating half a million dollars to conservative Prime Minister Tony Abbott’s election campaign. So who benefits from the continued existence of the plantation? The man who has given more than $1.8 million to the anti-gay, anti-abortion, and anti-immigrant Liberal party over the last 14 years.


Despite the outrage it appears that DiFranco has turned a deaf ear. She not replied to any of the tweets asking her to change the venue leading to many condeming her as a racist.


Allow me to invite you down to Louisiana to learn and play with me and some of my friends, exploring these and a few more of our favorite things!

We will be shacked up at the historic Nottoway Plantation and Resort in White Castle, LA, for 3 days and 4 nights exchanging ideas, making music, and otherwise getting suntans in the light of each other’s company. During the day, myself, Toshi Reagon, Buddy Wakefield, Hamell on Trial and others will lead workshops and lessons that focus on developing one’s singular creativity. In the evenings we will perform for each other and enjoy great food in a captivating setting.
We will arrive on Wednesday afternoon and that evening there will be a cocktail reception and an intimate performance by yours truly. Thursday, Friday and Saturday there will be seminars and jams with a show each evening by one of our illustrious artists/faculty. We will also have a collective outing to New Orleans so I can introduce you to my new hometown and some of the extraordinary things I’ve found there.


Bring your guitar, your journal, your kazoo or just your curiosity and come join us for some mind expanding fun! We have room in the circle for everyone.


No DiFranco, more than likly you will be entertaining in the plantations "White Room" called such becuse it was painted white to highlight the white woman. Its the slaves of Nottoway who lived in shacks, each having two rooms with a family living in each room.


@lisannetea @anidifranco Look at how they try to erase the history and pain, so fucking gross and ur supporting them pic.twitter.com/4BEu1gGXgz
— sarah hanlon (@HanlonSarah) December 28, 2013