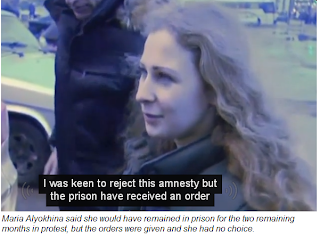 ITN News Pussy Riot member Maria Alyokhina has been freed early from prison in Russia under an amnesty, but slammed the move as a "PR stunt". The 25-year old was jailed in August 2012 along with two other members of the punk band for "hooliganism motivated by religious hatred" after performing a protest song in Moscow's main cathedral.

She believes her early release was a publicity stunt by President Vladimir Putin and claims she would have refused to leave jail if she had the choice. "Now I'm not afraid of anything anymore. Believe me", she told local media. Fellow band member Nadezhda Tolokonnikova was also released on Monday.

I believe that the purpose of this is to get people to say "oh, he's not so bad, we should go to the Olympics after all." While I am glad that these women are finally free, I think everyone will be able to see through Putin's motives.